This Sunday 29th July, we are super excited to hold our first official event as part of Tottenham Creates Festival, where we will be celebrating the talents of local women. It will be a night of street food, drinks, art & music that is entirely run by Tottenham women, as an inspiration for local young women, although anyone is be welcome!

The entry price is free, but guests are encouraged bring sanitary & women’s items that will be donated to homeless or financially challenged women in the local area through St Mungos.

Here is some more information about the women who are joining us for the evening and why they love Tottenham! _____

Growing up 'WondRWomN' (Mary Otumahana) would write raps in the back of her school books, documenting her experiences as a kid (formerly known as KidWondR) dealing with the trials and tribulations of a teenager. In 2014, ‘WondRWomN’ was birthed through the self-titled and self-produced album. She began performing as her alias at various places, including RichMix (London), The Roundhouse (London), Love Saves The Day festival (Bristol), LoveBox festival (London) and headlining her own show last year at Hope and Anchor (London). WondRWomN' is The Girl Next Door, that raps. This North London artist specialises in crafting her own unique brand of ‘Grit Pop’, blending elements of Hip Hop, Psychedelic Soul and Funk. Her EP ‘The Girl Next Door, that raps.’ is available on all popular platforms. Why do you love Tottenham? I love Tottenham because it has allowed me to grow in so many ways, from setting up my own business to meeting so many amazing people. The community and environment is so vibrant and inspiring and I can’t wait to see what the future holds for Tottenham.

Often as a DJ you can be defined by the genre you play. I made a choice to stay semi open format, rather than pick a specific lane, so my sets span Old and New School Hip Hop, Underground Rap, Alt R&B, Funk, Soul, UK Garage, Trap, Grimehttp://djlro.com/, Afrobeat, Soca, Reggae, Dancehall and more.

The joy is in responding to a crowd, surprising them, educating them, taking them on a journey with you, making them want to dance. Everyone has memories and emotions attached to different songs, and leading the mood of a night is maybe the most important part of my job. Left to my own devices, I always choose songs with soulful vocals on top of beats that catch a nod - J Dilla ‘Sometimes’ which samples the Brand New Heavies, or Maleek Berry ‘Been Calling’. I love the new wave of R&B - Syd ‘Nothin to Somethin’ and SiR ‘D’Evils’ which samples a reggae track by Billy Boyo. That combination of old and new, of weaving together sounds from different cultures and different times and using that to create an atmosphere - that’s what I‘m inspired to do.

Tottenham represents so much of what makes London amazing to me. The mixture of cultures living and working side by side - that diversity isn’t replicated in many other places in the world. And there’s a real feeling of community here - I know my neighbours, I’ve made friends who live locally, I chat with the baristas at Craving, or the chef at Loven Presents, or the security guard at Sainsbury’s. I felt welcome when I moved here a year ago, and now it feels like home.

I am a songwriter and guitarist from Haringey, now living in Tottenham. My music is often described as alt-folk pop/rock and as a songwriter, I draw from a wide base of influences. At the ‘poppier’ end you’ll find songwriters such as Yann Tiersen, Nick Drake and Laura Viers, at the ‘rockier’ end you’ll find, among others, Neil Young and Elliott Smith.

Lyrically, I am preoccupied with creating a sense of place and explaining context through descriptive or narrative lyric writing. I also explore relationships, less commonly written about it pop music – such as friendships, family dynamics and encounters with others further afield, whom we may never have actually met. Musically, I love to explore how melody can bring words to life and I have a particular interest in the process of recording and how a song can change, develop and build.

After many years of writing songs and playing lead guitar in a number of bands, I have chosen to take a slightly different direction and focus solely on songwriting. In 2016 I set myself the goal of writing an album’s worth of new songs, which as of 2018 has grown far beyond this, and from September I will be undertaking an MA in Songwriting at the Institute of Contemporary Music Performance.

A criticism often levelled at London is that it lacks a sense of community and if you’re based here in Tottenham, you’d find that hard to believe. London has always been a city of flux, and as the area inevitably changes and evolves, I’m hopeful that this unrivalled community spirit, is what will keep Tottenham unique, vibrant and friendly.

Tottenham is steeped in, often quirky, history and I love learning about it! We still have a village well, a Tudor tower that stands next to our own manor house - Bruce Castle. We once had the biggest furniture factory in Europe and the smallest toy cars, Matchbox, were first made by Lesney Toys near to the stadium. We have a working Victorian beam engine, our very own cake and Tottenham Hale’s tube station tiles, designed by Edward Bawden, depict a Saxon boat found in the Lee Valley at Tottenham Lock.

Today, I love that the area seems to lean into this quirky past - we have a pub in a toilet, a mini traffic system for kids in Lordship Rec, we now have our very own artisan cheese and quite possibly more fresh beer than water!

Describing my set I would say that it's an uplifting mood set that vibrates at the sounds of females vocalists from all times. An harmonic balance between rock, soul and funk. What I love about

Tottenham is a place that you can find peace and craziness at once. Quite in the hidden parks downhills and Lordship lane or busy spots in the main roads with all the coffees and pubs. A perfect balance to live in.

I draw a lot of figurative works, animals and patterns. Mostly imaginative, brush and ink and improvised as I go along. Too many rules or planning really ruins the fun out of it for me. I'm starting a new lot of paintings soon so I'm excited about evolving my style and technique a little more.

Its been great living in Tottenham over the last four years or so, such a diverse range of individuals, I've met an incredible amount of Inspirational characters from Tottenham.

Delicious plant based Chinese food, inspired by flavours of our heritage.  We host supper clubs, pop ups and street food stalls and have our very own sauces and oils for sale so that you can take a piece of Phung Kay Home.

We love Tottenham for the strong sense of community, support and diversity. It’s a place where individuality and creativity is celebrated.

To find out more: 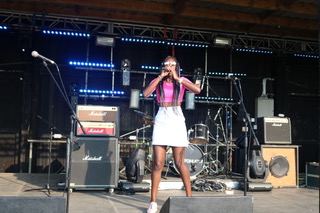